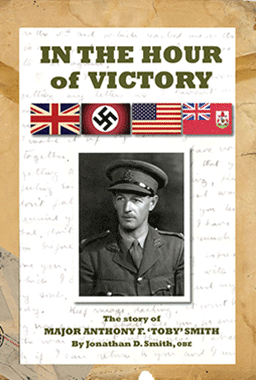 ‘In the Hour of Victory’ is the compelling story of Major Anthony F ‘Toby’ Smith (1907-1944), a Bermudian, who fought in the Lincolnshire Regiment and was killed in Holland on October 14th 1944. Based on his original 300 letters, cards and telegrams, and additional research, the story is told of his love for his wife, the late Faith Bower from Pennsylvania and five children, how much he despised the Nazis and how he was driven to defend, as he put it, ‘my King and Country.’

One of twelve children, five of whom saw active military duties in two World Wars, Major Smith survived a U boat attack and spent several years in the UK before finally seeing active combat. Meanwhile, his wife and five young children struggled to make ends meet during the war and Major Smith was constantly and sometimes heart-wrenchingly torn between his loyalty to his family and the battle against the Nazis.

The story, told for the first time in full, takes the reader through emotional highs and lows and is an incredibly detailed account with an ending few could predict. Not only is the book a highly personal account, there are descriptions of bomb ravaged London, war analysis, personal vignettes, the role of the USA in Europe as well as critical commentary of social and business life in Bermuda and the UK during the war years.

The research and the book was completed by his grandson, former Commissioner of Police in Bermuda, Jonathan D Smith.